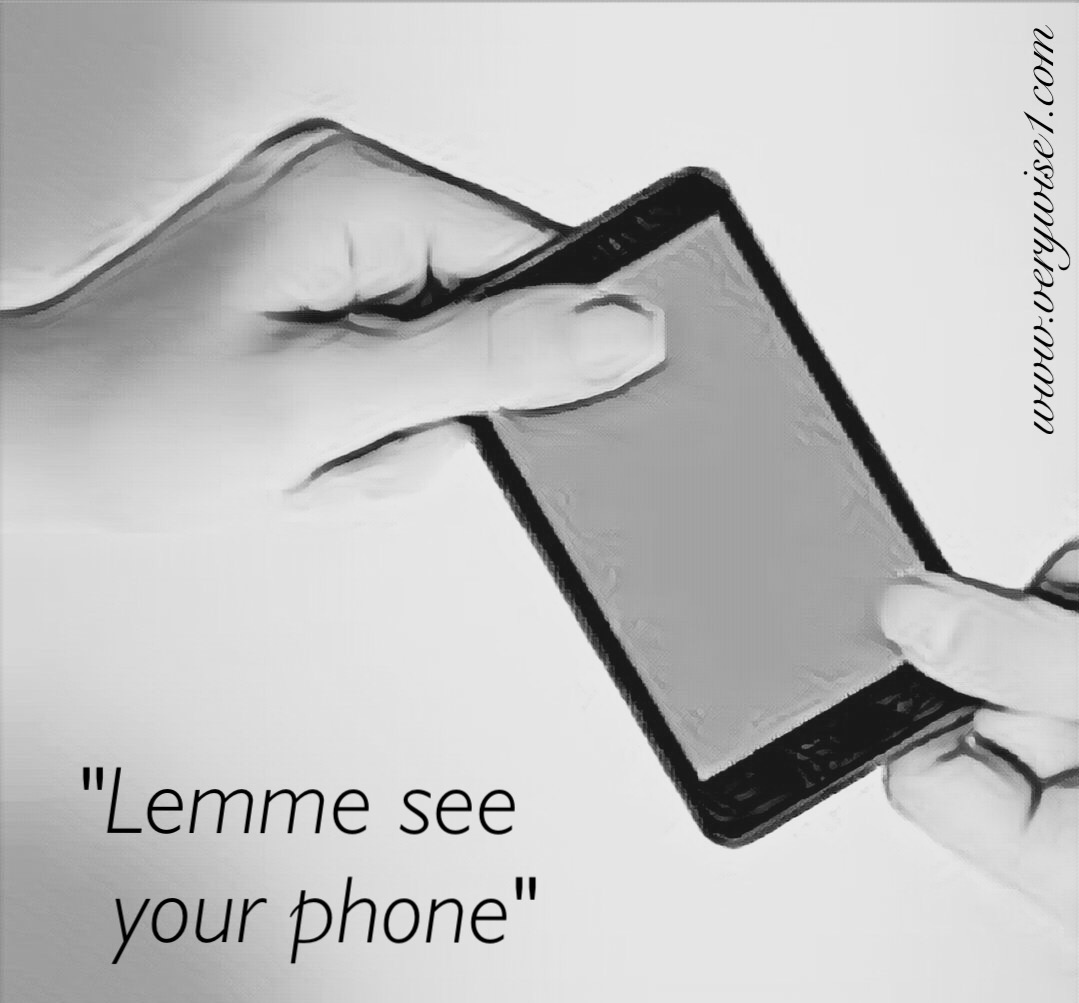 At one point or another, whether in the stage of getting to know one another, dating or the exclusivity of a relationship, the subject of cellular phones arises. While everyone’s perspectives seem to vary, the topic continues to create much controversy for some. In addition, while the subject has become quite popular within relationships, in some instances, it’s even the key element in ending them.

Some people believe that their phones are private. Some others believe that if/when their mate asks to see their phone that it’s a symbol of a lack of trust. Lastly, there are a select few whom aren’t bothered by the topic one way or another, remaining neutral.

So, let’s take a few brief moments to explore these perspectives and hopefully, narrow down some of the myths and truths behind them.

Cellular phones are most certainly private. After all, they require passcodes, fingerprints and numeric codes right? Well, while these security features are present with every electronic device, one could argue that the purpose behind those features is to ensure strangers don’t access the device, thus gaining possession of personally identifiable information. Others could argue that the purpose behind those security features is to prohibit unwanted access from strangers as well as whomever the owner deems to be unwanted. Well, both arguments are actually correct. However, the burning question is whether or not your mate is categorized as a stranger or unwanted.

Quick history lesson, the very first cellular phone was created in 1973. Decades later, that unique device was upgraded to what you’re holding in your hand while reading this article. That being said, social media, along with several other awesome features, were all integrated into these devices. The culmination of these features is what makes these devices so incredibly personal.

Before phones technologically evolved, nearly no one thought twice about allowing someone, specifically their mate, to use their phone. Hell, even strangers were allowed to make emergency phone calls. Back then, there was no caller ID, Internet access, Facebook, password storing apps or anything that would potentially jeopardize their relationship. Now, everyone’s phone is just as personalized as their own DNA.

Consensus: In theory, yes, allowing someone else to comb through your phone is most definitely exposing your privacy. Same principles apply if you wish to comb through theirs. However, with that being said, if you and your mate have exposed all else to each other (such as your bodies for example) how harmful could adding your phone to that list be? After all, you’ve got nothing to hide right? (Insert smirking emoticon and the infamous J/K here)

In some situations, one or both mates are bold enough to address the elephant in the room. What this means is that they may straightforwardly ask to go through your phone. While assertiveness is most certainly an admirable characteristic, demanding to do so is often viewed as displaying a lack of trust. Even more, it’s also a bit rude. Here’s why.

If/When your mate asks to go through your phone, it’s a unique feeling. Some people are unmoved by their request while others are nothing short of offended by it. I mean, if they trusted you, they wouldn’t want to see your phone right? Well, not necessarily.

Completely unrelated but, how many times have you double-checked to make sure you locked your front door before leaving even though you literally just turned the key to lock it? For some, the practice of going through their mates phone is using the same logic: double-checking. They may be completely and utterly confident that their mate is faithful, however, from time to time, they like to check behind them. Yes, this may sound irrational and a poor justification of insecurity, but for some, it’s a routine way of thinking. This being said, does double-checking to make sure that front door is locked an insinuation that one doesn’t trust themself, or simply their way of practicing the "it’s better to be safe than sorry" methodology?

Speaking of trust, some people often believe that when their mate is playing detective, it’s a direct result of their own guilty conscience playing itself out. This too is a theory. A wise man once said “in order to catch a criminal, you have to think like one”. So yes, the guilty party may believe their mate is just as guilty as they are. This is called Projection. This, of course, is all derived out of their own betrayals, while assuming that everyone is just as guilty as they are (or soon will be). In all irony, if the guilty party is questioned about their phone, they may quickly become defensive, refusing to comply. Having fun yet?

Consensus: Your mate asking to go through your phone is a harmless act. Once may be understandable but consistently wanting to is a need for concern. Keeping this in mind, if/when you or your mate demands to do so, therein lies an issue. All the same, it’s a simple logic. Random trivia: is it a breach of trust if your mate asks where were you last night? Answering that question is exposing information about yourself as well, no differently than handing your phone over to them.

Currently, that picture depicts the actions of a few. But, why is that? Well, a few surveys were conducted, yielding various explanations. Some stated that they keep their phone facing down out of habit. Some others stated that they do so purposely. When asked why, they went on to explain that it was to ensure their mate didn’t see who calls, in case one of their platonic, opposite sex friends were to reach out.

Argumentatively, the ladder is somewhat questionable. If their friend(s) are indeed platonic, going to such greats lengths seems skeptical. This is especially the case if communication is healthy within the relationship. However, one must also remember that even if a phone is facing upward, it doesn’t insinuate fidelity. Along with the advanced features created since 1973, call forwarding was also included.

Consensus: Unless during the night while trying to sleep in a darkened bedroom, the average individual doesn’t intentionally face their phone in any direction. Doing so typically indicates intent. Understandably, you wouldn’t want your mate to get the wrong idea if an opposite sex friend called but ideally, that’s the entire purpose of communication. Aside from that, sometimes people just throw their phones down. And much like a coin, it lands on either side. Simply put, it makes no sense fueling fire to a situation undeserving. Yes, facing one’s phone down could be a sign of deceit, but it also could be absolutely nothing at all.

This is likely the most argued action on the list. As a common practice, at one point or another throughout the day, the average individual silences their phone at least once. However, doing so in the presence of their mate is viewed as a solid sign of mistrust.

For some, silencing their phone is a relief. Between constant group texts, work and telemarketers, that small switch on the side of the phone is a lifesaver from the frequent alerts. On the flip side of things, some mates often see this as a tactic for shielding their deceit. This is especially true if it’s discovered that one only silences their phone while around their mate.

There are some, however, who prefer for their mate to silence their phone. As odd as it may sound, this may be due to frustration. If every time you’re around your mate, their phone rings nonstop or they’re receiving a new text every 5 minutes, it’s understandable to prefer that they silence their phone.

Consensus: Silencing ones phone is overrated in theory. Suffice it to say, this is not a clear sign of deceit. Simply put, some people just do not want to be disturbed. Yet again, with all of the advancements in technology, silencing a phone means little to nothing. There are several settings that can limit the amount of alerts (and from whom). Therefore, it would not be wise to assume your mate is cheating because their phone is on vibrate. Note, there are settings to restrict alerts to list of names of your choosing. Fun fact: some people actually silence their phones while home alone at night before sleep. Reason being, they just want to rest!

The standards of access to each other’s cellular phones will ultimately rely on the 2 people in the relationship. In some cases, one mate may elect to have their mate’s fingerprint saved into their phone and share all passcodes. While in other cases, it’s forbidden to journey through each other’s phone or even glance. But, while determining where you stand, consider a few things.

In some relationships, both parties may cohabitate or even have dual ownership of a car/property. In some of these cases, neither mate will grant the other access to their phone. In that light, is it really rational to share financial responsibility with someone (jeopardizing one’s credit, mind you) but restrict permissions to an electronic device?

In our current society, people will share their social security number, bodily fluids (sex) and their currency before sharing their phones. While this practice is intriguing, it also raises the question of why. Cellular phones have become an extension of one’s hand, much like an additional limb.

Many view their phones to be just as personal as a diary or journal. Phones have become a safe place of comfort, openness and security while navigating the internet, social media, capturing photos, holding personal conversations with various people and safeguarding notes and passwords. It’s like a personal assistant and can even take back to you, making it even more of a technological bond.

So yes, it’s understandable to question why your mate would want to dig into your personal space so deeply. Just remember, even within the healthiest relationships, there is still space to be kept.

Inevitably, there is no right answer. Every side has a valid position. Yes, your mate should be able to reply to a text message for you while you’re driving. And yes, your mate should also respect your privacy enough not to demand access to a phone whose bill they don’t even pay. But, like all things, this will be tailored to the relationship. So, hopefully, both parties will cease with attempting to convince their mate to see things their way and simply respect the difference of opinion instead. There’s a phrase for it: Agreeing to Disagree.

In closing, whichever end of the spectrum you’re finding yourself, be careful what you seek out. As they say, if you go searching for something, you might just find it…